The mega company has launched a contest to locate its second headquarters in the United States and New York is a clear candidate.

Amazon happens to be the largest online retail company in the world, possessing an enviable position economically. Based in Seattle, Washington, it was released in 1994 by the hand of its founder, Jeff Bezos. From that moment on, it has only grown to its current position, with 341,000 employees, assets valued at 19,285 billion dollars (16,364 of euros) and revenues of 135.98 billion of the same currency (115.38 of euros) only in 2016. Figures that dizzy …

The company does not stop growing and has realized that it needs more space, specifically, it wants another mega-headquarters in North America.They are very compatriots, but they don’t know where to be in the vast region of the United States, so they designed Amazon HQ2, a contest for the country’s metropolis, anyone who can present themselves with their offer. To give you an idea of ​​what it means to install the headquarters, I will tell you that they expect to spend 5 billion dollars (alone) on its construction, about 4.24 of euros (plus dizzying figures).

In celebration of NYC’s bid for @amazon HQ2, we lit up our city Amazon Orange. Iconic buildings and locations participated, including @empirestatebldg, @oneworldtrade, and @timessquarenyc #hq2nyc

The company promises that they will create 50,000 high-level jobs, matching those they already own in Seattle, in addition, of course, to the creation of tens of thousands of jobs during construction and, not least, another tens of billions of dollars in additional investments in the community where it is located. With the size of this candy, it seems that they have achieved one of their objectives: to attract the attention of 150 cities that have taken an interest in the contest.

Of course, the preferred city for much of the world could not be left out of this casting. New York is strongly committed to being an orange city and, obviously, meets all the requirements that Amazon claims. Namely: they must be metropolitan areas with a population of more than 1 million people, must have a favorable environment for companies, have an international airport nearby, good connections by highways and main roads and, logically, must have a lot of surface where to be able to build, in particular, the figure cannot go down of 740,000 square meters.

Candidate cities have done everything possible to get Amazon’s attention, aware that it is not only about fulfilling formal requirements, but also that they have to win the heart of the company. The madness seized the participants … Tucson (Arizona) took a huge 6.5 meter cactus to Seattle, although Bezos rejected the gift, «it’s great, but I can’t accept it»

The city of Denver, in Colorado, offers its 300 sunny days a year (taking advantage of the fact that Seattle is colder, that lows!) And happiness for its workers (because of the large number of breweries it has, another lowness! ) Although, in honor of the truth, the most original has been the proposal of Stonecrest, in Georgia, which has not only said that it would change the name of the city to that of Amazon, in addition, it would put Jeff Bezos as mayor!! (Unsurpassed, seriously).

But the world capital of superheroes could not be left behind and, on the same day that the New York City Economic Development Corporation presented its candidacy, naming four of its neighborhoods with the greatest potential for macroenterprise to sit in “home ”, Lit its most iconic buildings orange like the Empire State Building and the One World Trade Center. A demonstration of love.

The neighborhoods where Amazon could sit are Midtown West, with mega projects like Hudson Yards and Manhattan West, which will provide many square meters for future residents. Long Island City, which has a good assortment of commercially priced properties, Brooklyn Tech Triangle, surrounded by parks and with access to 13 subway lines and, finally, the Financial District (Wall Street, for more details).

The mayor of the city, Bill de Blasio, explains to Bezos that «the city of New York is the world capital of commerce, culture and innovation», in a letter where he adds: «No city has a greater diversity of talent, of industries and confluences that feed great ideas and companies». As if that were not enough, Governor Andrew Cuomo also wrote to the company, urging him to move to the state of New York since, according to him, «commercial innovation is integrated into the DNA of New York.» 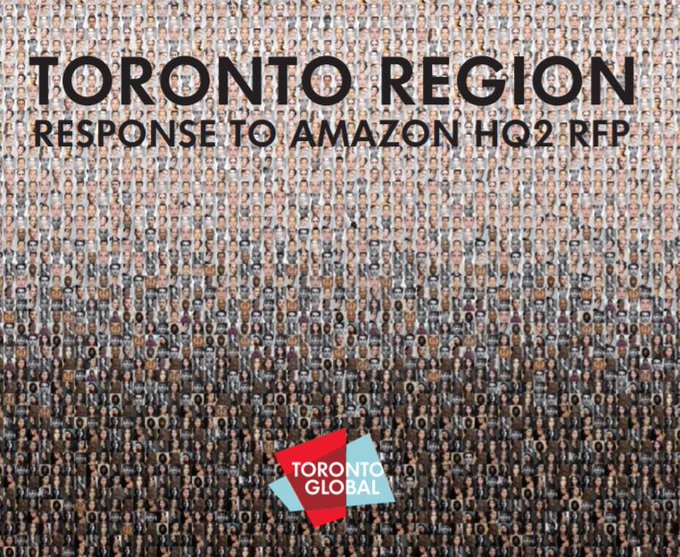 92 people are talking about this

Other cities have also bet heavily on this competition, Toronto has made an extensive document with more than 200 pages where it details locations, festivals and possible residential centers. Detroit has created a website where it has uploaded a video where it tells the company «Move here, move the world.» Another that has given everything has been Pittsburgh, bringing together an extensive cabinet of officials, companies and non-profit companies, in an effort to prepare the best offer.

The biggest handicap that the winning metropolis will face is the possibility of increasing the rental price by more than $ 200 per month (170 euros), although this varies by city, of course. However, New York is a huge city and a great candidate for Amazon, the urban development of recent years allows it to face the entry of 50,000 new people. Anyway, we will have to wait next year, when the mega company decides where it will locate its second headquarters. Bets are allowed.